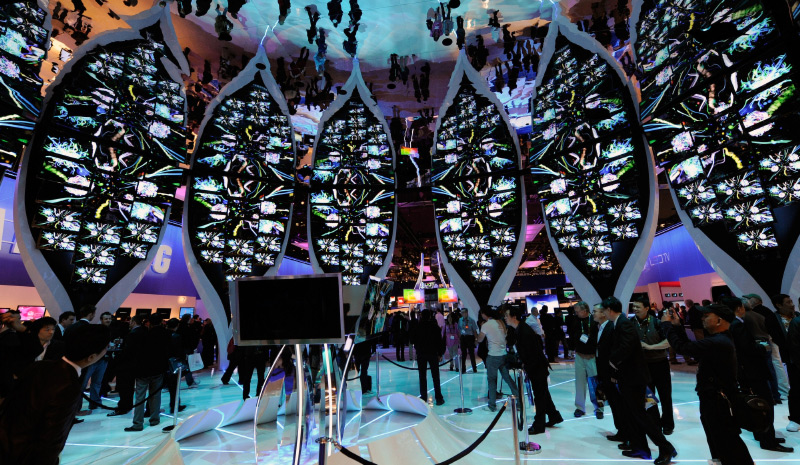 Every year hundreds of new products and technologies make their debut. Some will have their 15 minutes of fame; others will have a longer-lasting impact because they represent a product or trend that has the potential to reshape the business world. Here are our 10 technology ideas which could change our world:

Tablets are becoming the tool of choice for many business applications as companies find new ways to adapt them. Accessory manufacturers were showcasing mounts to convert iPads and other tablets into new tools—everything from customer service kiosks to quality control monitors. A startup has a line of medical devices such as blood pressure monitors with iPad docks so that they can be used as controls and for monitoring. This may be just the start, as tablets are inexpensive and easy to program, making them superior replacements for many devices.

Home appliance and television manufacturers are beginning to offer apps to allow smartphones to replace TV remotes or to control ovens, dishwashers, and other appliances remotely. A few automakers are looking at building smartphone stands into their cars so they can replace built-in GPS systems. Gaming companies have replaced game controls with smartphone apps. In the future, smartphones will be used to control office and factory equipment remotely without investing in fancy remote controls.

HD video cameras have gotten so small and inexpensive, and made it so easy to stream content, that they are being adopted for many new uses, including live-streaming meetings and daily business activities. Several companies are offering “people-cams” that can be discreetly worn by police officers or bank tellers to record everything that happens during a day. Camera manufacturers make a range of small $200 cameras that connect automatically to Wi-Fi and stream video to a cloud site that can be viewed anywhere, any time on a smartphone or tablet.

The age of drones

Some companies have placed tiny wireless cameras on inexpensive remote-controlled drones so they can be used as unmanned surveillance devices. The drone can be programmed with an iPhone to fly precise routes over buildings, highways, or construction sites to monitor activity. Inexpensive drones will make it possible for companies to monitor all their operations better, even those in remote locations.

Retailers can reduce costs and improve customer service through virtual in-store salespeople. The Beam is a mobile video kiosk that allows salespeople in remote locations to talk to in-store shoppers via a computer and wireless connection. Shoppers can see the clerk’s face on a video screen and talk with her in real time. One clerk can cover multiple stores at once, reducing downtime.

After years of hype and unfulfilled promises, homes are finally getting smarter, thanks to Wi-Fi and cloud computing. Large appliance manufacturers have self-monitoring refrigerators, ovens, and clothes washers that report performance and allow users to control them remotely with an iPhone. A system that allows homeowners to control lights, doors, locks, thermostats, and virtually anything electronic in the home remotely with an iPhone app has already been made. Smart appliances have the added advantage of allowing companies to create databases of usage behavior to understand consumer usage and needs better.

The human body can be monitored, too, allowing us all to perform better and live longer. Heart Math makes heart monitors that are worn daily and report results online directly to doctors. Nike has a new athletic monitor, the Nike Plus fuel band, a wristband with an accelerometer that tracks all calories burned in a day.Hapi Labs has invented the Hapi Fork, which tracks eating patterns and alerts users if they are eating too fast.

By monitoring brainwaves and converting them into energy, it is possible for humans to move physical objects simply by concentrating. A startup is launching a $200 brain-sensing headband called the Muse. Initially it is being used as a video game controller, but there are plenty of possible business applications for people who want to move objects effortlessly.

Video and photography are getting clearer. All the major TV manufacturers are now offering ultra-high-definition video, with four times the clarity of regular high definition. Camera companies also have super HD versions. Just as HD has become the standard now for all video and graphic business presentations, UHD has the potential to replace it, making communications clearer and more lifelike.

With all this new technology, we all need more power. MagicCharger are portable chargers the size of a cigarette lighter that can be used to recharge smartphones and tablets anywhere.