The scale of universe

We tend to the think of the Universe as very big, and of course it certainly is. We don’t as often think of the Universe as being very small, but it’s that, too. And it’s in the realm of the micro rather than the macro, relative to humans anyway, where a lot of interesting things happen that are pertinent to our daily lives. In the micro world is where most living things are to be found in the form of bacteria and viruses, and it’s also in that world where we’ve learned to harness the power of electrons and put them to work on our behalf.
When designing and making products for commercial and industrial use, engineers are accustomed to thinking in terms of millimeters, microns and smaller. But many non-technical people have a hard time visualizing just how big that is, how it relates to the world we know, and also just how tricky it can be to make objects to that scale. So we’d like to present a fascinating glimpse of the micro world which just might also help you to look at your own place in the Universe in a different light.
There’s an absolutely wonderful and fascinating tool available on the internet called “The Interactive Scale of the Universe”. No, we didn’t create it, that credit rightly belongs to Cary and Michael Huang
[Copyright © 2012 Cary and Michael Huang (http://htwins.net)]. Below is a snapshot of the opening page: 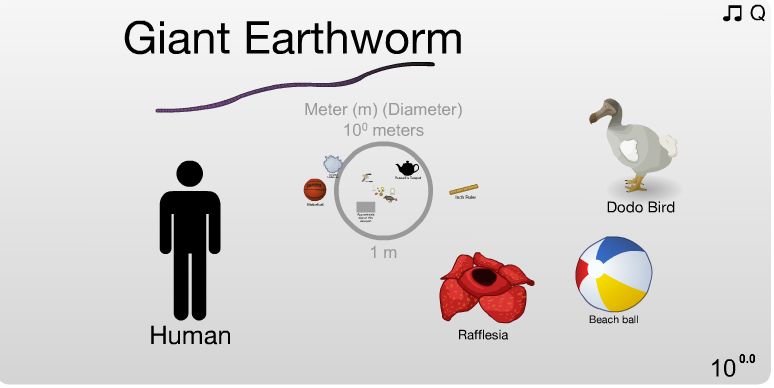 Here you can see the representation of a person next to some other common objects for comparison. Note that in the lower right-hand corner we have 100.0 power. That is, we’re dealing with things in the one meter range in height – that’s our starting point of reference. Every scroll forward or back from here on out will move you, the viewer, one additional power of ten. You’ll quickly see how things start to get very small indeed within just a few powers of ten smaller than a human being. 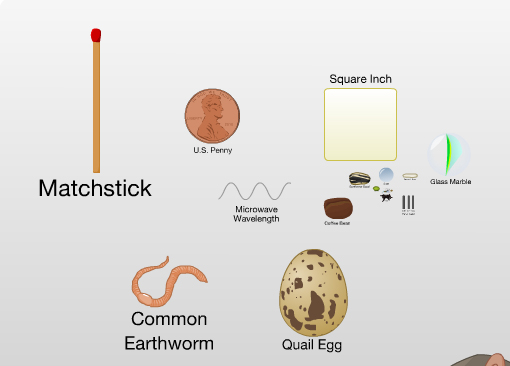 Now we start to move into the micro world. This is at 10 -1.4. At that scale we are looking at a matchstick, a quail egg and even a penny. Notice also that we can even see a wavelength of microwave radiation, the longest wavelength in the electromagnetic spectrum. Pretty big. This is also the scale of our first unit of measurement, the inch. We’re all familiar with how big an inch is, and we often spread our thumb and forefinger apart to approximate the size of an inch for relatively crude, general measurements. But this would never do for engineering purposes. We need to get smaller. 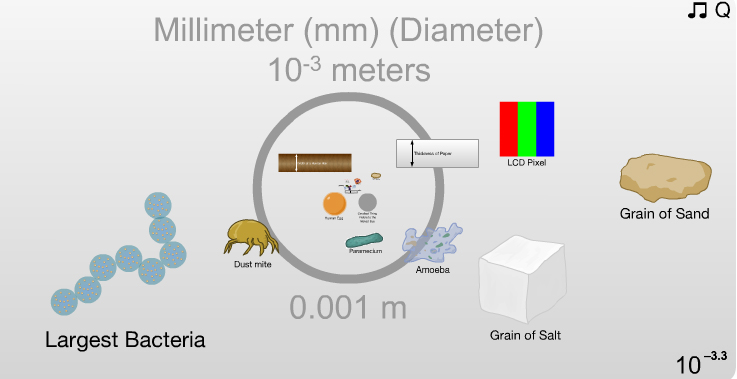 Here we are at 10-3, the size of a millimeter. That’s more like it. Notice that this is only 3 powers of ten, but now we’re talking about things one thousand time smaller than a person. At this scale we can see a grain of sand, a dust mite or a large bacteria. But when designing a circuit board, or milling an aluminum extrusion, or CNC milling a mold for plastic injection tooling, a millimeter is still much too large. For precision manufacturing, we need to get down to the scale of a micron, which is still one thousand times smaller. 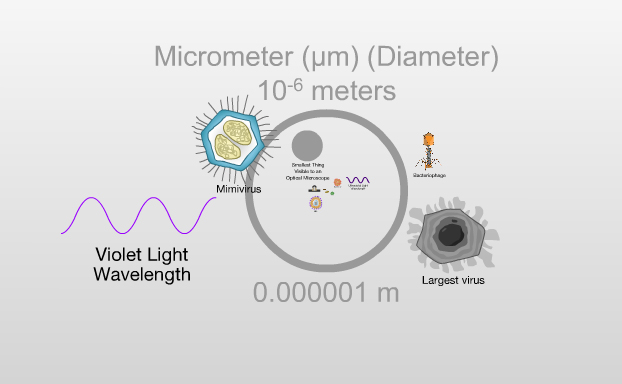 A micron, “µ”, is about the size of a virus, the simplest of all living things. It’s also on par with the wavelength of violet light. When doing precision manufacturing, modern CNC machine tools can typically hold tolerances of 10 microns or better, so that’s pretty small – much smaller than can be seen with the naked eye. But there’s another very important point to make here.

At this scale, 10-5 or -6, we’re now operating at the same level as certain fundamental wavelengths of energy. These are physical constants, but what it means in practical terms for product designers and engineers is that ordinary and unavoidable thermal expansion starts to play a role in how parts, and tooling, expand and contract to a degree that measurably affects final tolerances. Allowances for this movement of material must be made in design, and it becomes exponentially more difficult – and expensive – to create finished parts reliably smaller than this size. No machine tools and no amount of technical skill can deny Mother Nature in this regard.

It may well be the case in the future when we start building objects one atom at a time, in which case we’ll be able to greatly exceed these levels of accuracy. But so long as we continue to do most of our manufacturing with cutting tools, it’s not likely that we can ever get more precise than a micron without using very specialized techniques.

But of course, you want to still play around with this amazing interactive tool, don’t you? You want to see just how small small is, and just how big big is? Well, we’re not going to tell you. Check it out and be delighted at the wonderful Universe we live in.