6061 Aluminum: Get to Know its Properties and Uses

One of the important decisions you have to make when working on an extrusion project is alloy selection.

You may be considering 6061 aluminum, as it is one of the most commonly extruded alloys. It’s an alloy with a long history. Developed in 1935, it was originally called “Alloy 61s.”

Today, people also refer to it as “structural aluminum.” Its mechanical properties make it ideal for a wide range of applications. However, it is especially suitable for applications such as building products, electrical products, piping, and recreational products.

It is a wrought alloy, as opposed to a casting alloy. So, it can be extruded, rolled, or forged into a variety of shapes.

Here are Some General Characteristics of 6061

Its strength and resistance to corrosion are improved through tempering.

Here we can see the density of the alloy. Note that there is no difference in density between the T4 and T6 tempers.

Here we can see the tensile strength, yield strength, and modulus of elasticity for both the T4 and T6 tempers.

Here we can see some thermal properties of the alloy including the coefficient of thermal expansion and thermal conductivity. Both the T4 and T6 tempers are included.

Note: The material properties above have been pulled from Matweb, here and here. Please note that they cannot be 100% verified.

Now, you may be wondering about the composition of the 6061 alloy.

This alloy is part of the 6000 series of alloys. As such, its major alloying elements are magnesium and silicon. Magnesium is added to increase strength, while the silicon is added to reduce the metal’s melting temperature. Here we can see the guidelines for the chemical composition of 6061 aluminum.

Now that we’ve seen the chemical composition of 6061, let’s talk about how the alloy compares to some other key options.

Comparing 6061 Aluminum to Other Alloys

The 6061 alloy is one of the most common for extrusion, but you may be considering other options for your particular application. Below are some other common alloys that are often considered as alternatives. 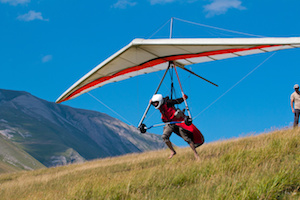 One of the key reasons to consider 7075 aluminum is for its high strength. Alloyed with zinc, it is one of the strongest alloys available and stronger than 6061. But it offers a lower level of corrosion resistance than 6061 and is also more difficult to weld. 7075 is used in marine, automotive, and aerospace applications where strength is a very high priority. It is also used in a firearms manufacturing and is even used in hang glider frames. Learn More » 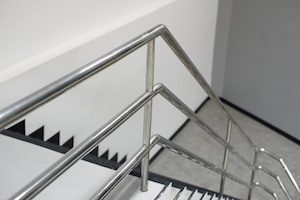 6061 and 6063 are the two most popular extrusion alloys. 6063 aluminum occupies the number one spot and 6061 occupies spot number two. As alloys in the 6000 series, they both have magnesium and silicon as their primary alloying elements. Thus, they have many similar properties. 6061 offers higher strength, however. As such, it is often used for more structural applications. 6063, on the other hand, is used for applications such as railing or trim, windows, and doors, due to its better appearance and corrosion resistance. 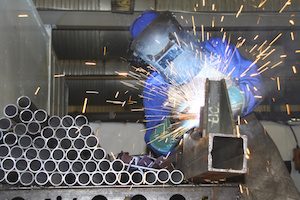 Like 6061, 5052 aluminum has magnesium as a primary alloying element. In the case of 5052, it is the only primary alloying element. 6061 has silicon as well. One of the key benefits of this alloy is its high level of weldability compared to other alloys. For projects where weldability is key, it is worth considering. One downside to 5052, though, is that it is not heat treatable. It is good for a variety of welding applications and it works well in marine applications due to its high corrosion resistance. 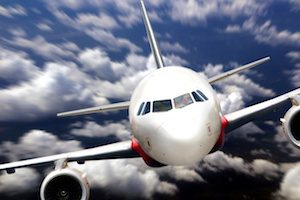 Primarily used in aerospace applications, the 2024 alloy is known for high strength. Its main alloying element is copper, and although it is strong and has good fatigue resistance, it is less machinable and more difficult to weld than 6061. It also offers poor corrosion resistance and is often used in wing and fuselage structures which come under high tension.

The 6061 aluminum alloy is one of the most common and versatile for extrusion. It is generally referred to as structural aluminum since its strength makes it ideal for structural applications. However, because of its good combination of properties, it can also be used in a variety of project types.

Download our PDF on 6061 aluminum properties to keep as a reference.

Also, if you’d like to learn more about how to optimize your part design for the extrusion process, download our Aluminum Extrusion Design Guide. 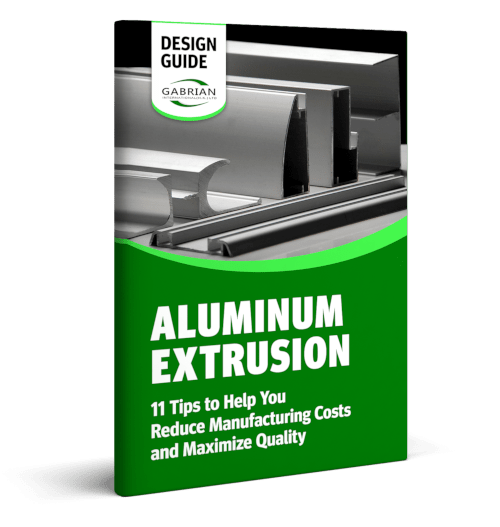 In this guide, we provide 11 tips to help you optimize your designs for the extrusion process. 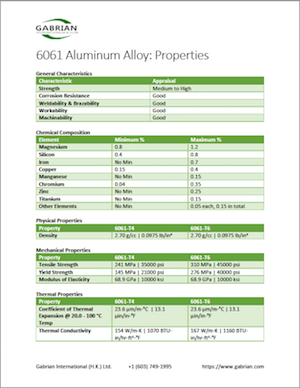